The Evolution of Software Product Demos 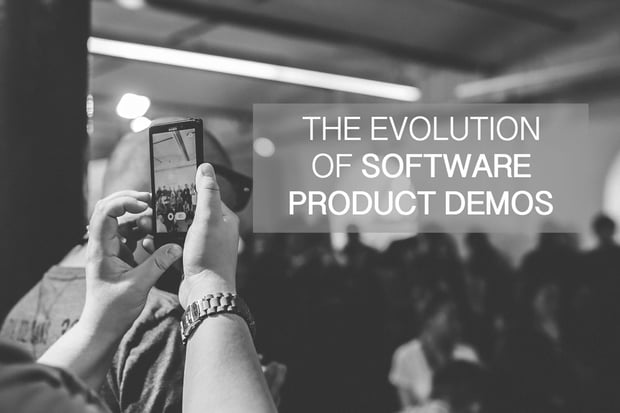 Giving product demos has always been an essential part of growing sales in the computer software industry. As computer and software technologies have evolved, so has the manner in which companies demo their products.

In fact, looking back, we can see how certain technologies created quantum leaps forward, each time changing the ways companies demoed their products. By recapping the many different evolutions of the product demo, we can predict where today’s technologies may take us in the future. Let’s start from the beginning...

For the first couple of decades in the IT era, beginning around 1940, computers took up entire rooms, most software was custom built, and the sales cycle was long and complex. During this time, doing a product demo often involved bringing sales prospects to your office—at your expense—and showing them in a face-to-face exchange what your company was capable of.

In 1976, the floppy disk was introduced. The introduction of floppy disks and personal computers represented the first quantum leap forward in how software products were demoed to prospects.

Rather than always meeting face-to-face, companies could now put dummy versions of their software on these new disks and send them to prospects. Companies could then get on the phone with their prospects and walk them through the product. Floppy disks also allowed salespeople to become mobile: now, companies could fly sales reps around the country to meet with prospects to demo their product for customers. This became even more prevalent in the early 1980s as laptop computers became more powerful.

After acquiring Forethought, Inc., which pioneered a program called Presenter, Microsoft made Presenter its own and released its now famous PowerPoint. PowerPoint was originally designed to create engaging presentations, but technology sales teams began using it to create images, charts, and content to demo their software products.

This jump forward introduced something into product demos that had been difficult to achieve with earlier technologies: scale. Companies could now send out their PowerPoint decks (as electronic files or in a hard copy format) quickly, easily, and cheaply. For many years, PowerPoint was the dominant product demo tool. 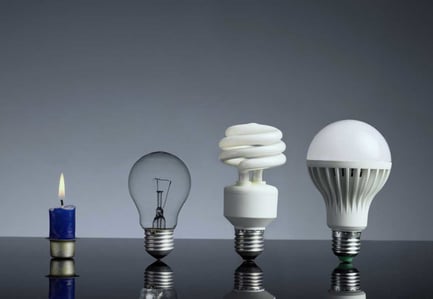 In 2004, the demo game completely changed. Citrix combined a couple of their existing services to offer GoToMeeting. (Although WebEx had shipped in 1996, online screen sharing ability did not enter the picture until about the same time as GoToMeeting.) Screen sharing technology immediately became the de facto method of demoing products, and that technology still pervades to this day.

Sales engineers and account executives could sit at their desk and do live demos for 10 prospects a day. GoToMeeting was interactive, responsive, and provided the salesperson that most desperately desired sales demo capability—a personal touch. As this technology has evolved, so has the demoing experience. In fact, supporting and helping companies do better live demos has evolved into a boutique industry. It could be argued that this technological evolution represents the largest leap forward in the history of how companies demo software products.

The 2010s: Scalability Becomes the Issue

Things have remained largely unchanged since the introduction of live-screen sharing. There are some companies that still use slide-based technologies to demo their products, but engagement with that regressive technology continues to decline as prospects’ patience for slides wanes. And, as marketing and lead generation technologies continue to evolve, screen sharing technologies are creating problems for companies. The two biggest challenges it creates are the inability to scale live product demos, and the dearth of meaningful data around how prospects interact and engage with live-screen sharing demos.

Companies that invest in marketing automation tools feel the first pain point deeply, since their sales teams have to do more product demos as their lead production increases. Because individual salespeople can only do so many demos, time becomes their limiting resource. The demos-per-salesperson ratio is difficult to change, and presents a major scale challenge. The more leads companies have, the more demos they need to do for prospects, and the more salespeople they need to hire.

Luckily, a solution to these two challenges does exist: automated interactive demo videos.

If you want to process an increased number of leads, you need to educate those leads early in the sales process to engage and qualify them into prospects. However, most companies immediately push for a live demo, which introduces scalability problems. Automated interactive video allows those leads to engage in an asynchronous and personalized demoing experience. In addition, automated interactive demos allow for your product demo to be socialized organically among the key stakeholders throughout a prospect’s organization. Live demos will always be important, but when they’re preceded by automated interactive demo videos, they are more effective and contextually rich because your prospect’s entire buying panel is now well-educated on your product.

But what about data? The result of the automated interactive demos is a wealth of rich data that you can extract that reveals how your leads are interacting with your product demo, and their level of education and engagement. You can find out what is important to them and what is not, how much they engaged with the video, and how they socialized your product through the buying panel.

This wealth of never-before-seen data adds richness to your sales conversations, and when coupled with sales and marketing automation tools, can be incredibly powerful in helping you successfully navigate a sale.

While we believe that CONSENSUS is a new quantum leap forward in product demos, we’d love to hear what you would like to see in this next big evolution of demoing software products. We’ve seen previous evolutions in the history of product demos, so now, we ask: what’s next? 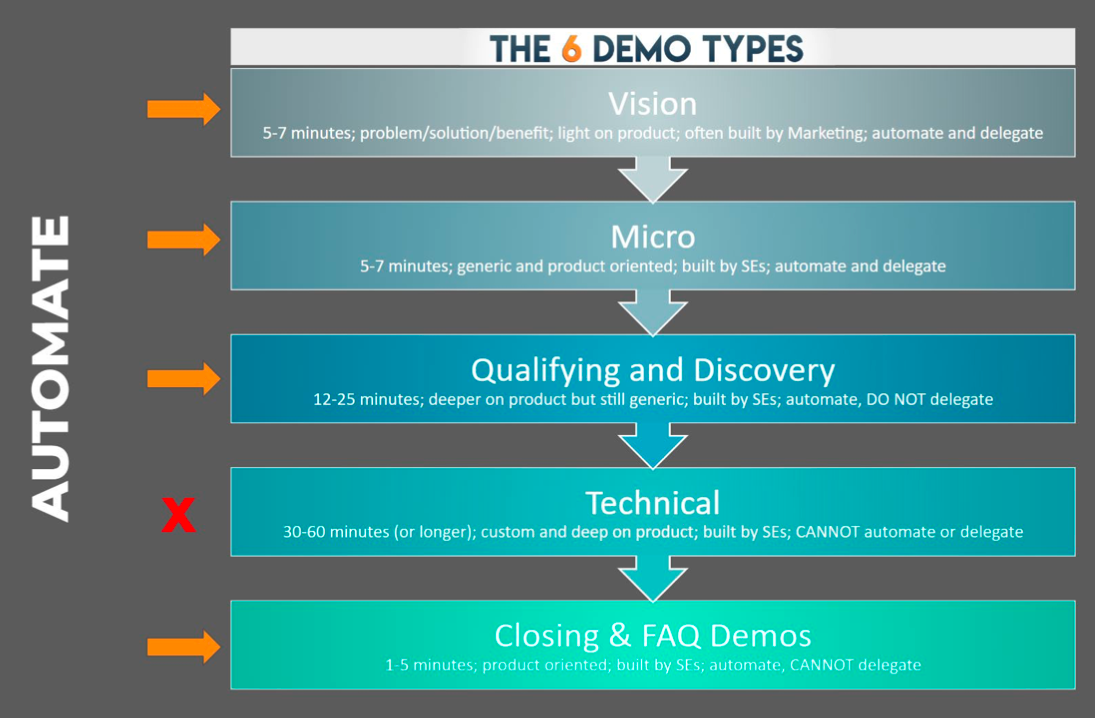 Intelligent Demo Automation: What Demos Can We AUTOMATE? 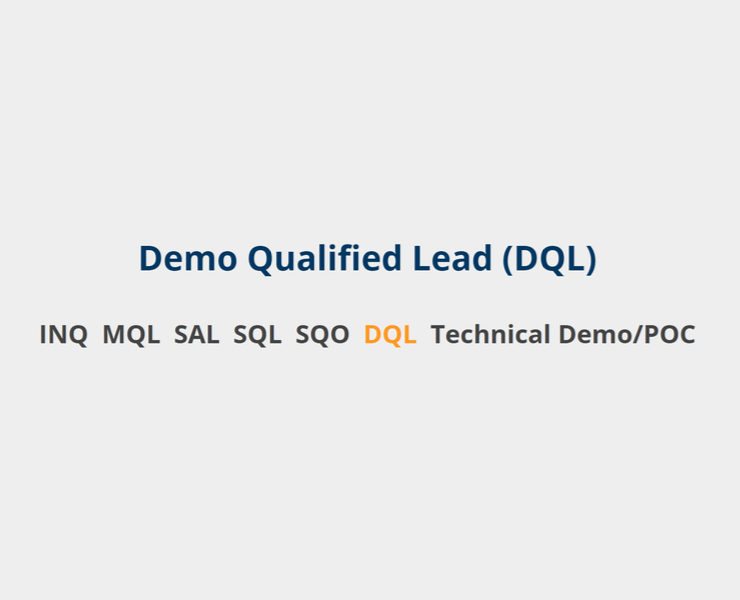 Scale Presales by Elimination with the Demo Qualified Lead (DQL) 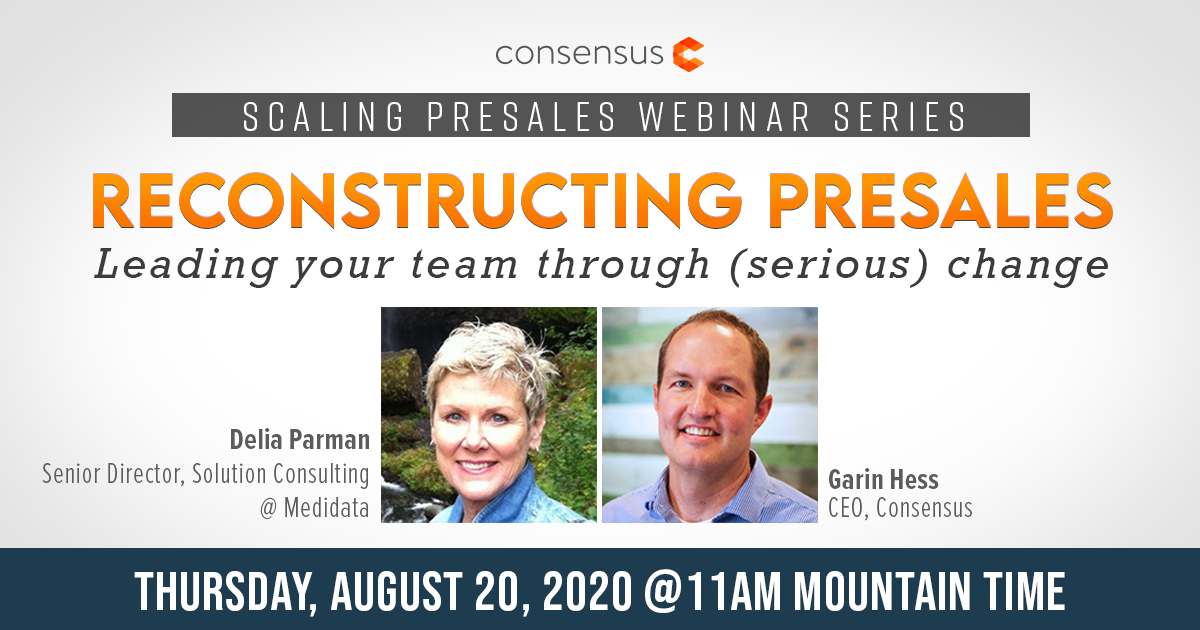